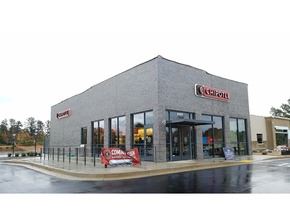 Applicant is presenting a plan for an overall 67 foot by 34 foot (2,316 square feet) facility for Chipotle at 1840 Franks Parkway, which is situated within the Heritage Crossings of Green Planned Development. The proposed use, which also includes a drive-through facility, is permitted in the PD District. The plans are also consistent with the approved conceptual plan, which was originally approved in 2010. The applicant is also the developer of the District.

The proposed site is part of the existing 1.95 acre Lot 1-R, which is located on the south side of Franks Parkway and adjacent to the existing pump station. This lot would be split (via report) to create the one-acre site, which would occupy the western half of the existing parcel. It is currently vacant and bounded by an existing stream corridor (and Riparian setback) to the south and an internal access drive for the existing commercial portion of the District (Acme, etc.) to the west.

The applicant will continue to own the property upon development and would lease the building to Chipotle.