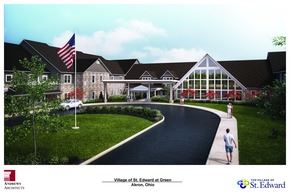 Applicant is presenting a site plan for The Village of St. Edward, a proposed senior-living facility in Phase I of the Spring Hill Business Park, a commercial allotment that is also scheduled for preliminary plan review at tonight’s meeting. The proposed facility would offer Independent/Assisted Living accommodations and Memory Care services. St. Edward currently operates a similar facility in Fairlawn.

Current code permits Assisted Living/Memory Care as a conditional use in the B-2 District but prohibits Independent Living. Based upon information provided by St. Edward regarding the scope of services provided to independent living residents, we have determined that the entire facility would meet the definition of an Assisted Living use.

A public hearing and issuance of a Conditional Use Certificate by the Planning and Zoning Commission is required for this project, therefore. The hearing has been advertised in the Suburbanite and contiguous property owners have been notified.

The proposal involves the creation of a 12.2-acre parcel that would be situated directly south of the City’s Spring Hill Sports Complex. Frontage for the parcel would be created via the southward extension of Fortuna Drive. (Note: Technically, the site currently is part of a 104-acre tract of land that has sufficient frontage on S Arlington Road The proposed Business Park would utilize the 85-acre portion of the tract that is zoned B-2 and is situated directly north of the Spring Hill residential allotment.)

It involves the approximately 600 foot long extension of Fortuna Drive and eastward extension of Southwood Drive from S Arlington Road. Creation of proposed parcels and dedication of roadway would occur via the platting process.

The site is currently vacant and primarily wooded. It has a high point in the northeast corner that falls approximately 40 feet toward the west. It also contains a wetland area, a small channel, and a temporary storm water management basin (for Sports Complex/Fortuna Dr. drainage). The wetland would be disturbed to accommodate the project. The required approvals/permits from the Army Corps of Engineers are in process.

The facility would be developed to accommodate 50 Independent Living units, 48 Assisted Living units, and 28 Memory Care units for a total of 126 units. The proposed density of 10.33 units per acre would comply (18 units/acre maximum). The Independent Living would occupy the northern wing, Assisted Living would be the southwest portion of the building, and Memory Care would be in the eastern wing.